At One with the Water we are proud to honor adaptive athletes nationwide. Below are just a few of the champions we support, including one of our own!

Athletes Without Limits USA National Team will be competing at the 2017 INAS Swimming Championship, to be held in Aguascalientes, Mexico from November 27 – December 4, 2017.

INAS- International Federation for Intellectual Impairment Sport was established in 1986 by professionals in the Netherlands who were involved in sport and wanted to promote the participation of athletes with intellectual disabilities.  INAS has a membership of 80 nations and is a member of the International Paralympic Committee.

We’d love to introduce you to few inspirational athletes representing the US and adaptive athletes everywhere! 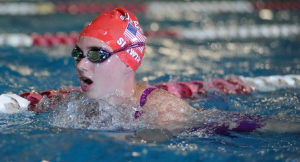 As soon as the coach yells “go,” 15 swimmers dive into the 6-lane swimming pool at Superior Athletic Club. During this practice drill, Sara Slawta is third in line in lane six. In the water, Slawta, who was diagnosed with brain impairment at a young age, is just like “one of the other kids,” says her swimming coach of 14 years, Siouxha Tokman. Slawta swims in the Elite group at Superior Stingray Swimming, the most competitive level at the club. … Slawta joined Superior Stingray more than a year ago. Since then, she has come in every day for a two-hour practice. “Practice makes perfect,” she says. “I just like swimming, so I come every time and try to be better each time.” – The Mail Tribune

Sara had her sights set on the INAS swimming championship way back in July, and she is no rookie in competition. She took home nine medals at the 2017 Athletes Without Limits Long Course National Championships AND helped break an American record as part of a 4×100 relay.

This is Jonny Pierce, American record holder and swimmer for the US Paralympic Team. Pierce, who is autistic, has hypersensitive hearing. He discovered as a boy that the pool was a calming refuge. “He loved the water when he was really little,” said his father, Tim. “Before he could swim he would jump in the water and just float. He liked that the water blocked his ears. He would float with his ears under the water. I guess we didn’t know that when he was young … but it blocked out all the sounds that were bothering him. “He would float, cross his legs and cross his arms, with his ears underwater. We’d have to pull him out.” Now 22, Pierce still loves the pool, but he does more than float. He was introduced to swimming by his parents — who both swim at the masters level and coach — at age 7 and participated in youth and high school programs. – From USA Swimming

Now, Johnny works hard in the pool and the gym 5 days a week. His work has paid off with steady improvement and he currently holds 18 American Records for S-14 Paralympics.

And then there is Leslie Cichoki.

In competition, Leslie is both calm and powerful. At one of her first Paralympic meets she was the only female swimmer in the entire meet to complete a 200 Butterfly, earning her huge props from her teammates and the Paralympic swim community. Leslie has been swimming since she was four years old. When she is not in the pool — which is rare these days — Leslie also enjoys putting her athleticism to work playing other sports and encouraging fellow Athletes Without Limits throughout the US on Facebook. –  Athletes without Limits

Stay tuned this week as we highlight some more of these inspirational athletes who dream big, work hard, and bulldoze the obstacles in their path. A universal lesson for us all.

At One with the Water, we work with swimmers just like the ones mentioned here. In fact, one of our own is on the team. Help us support adaptive athletes by donating today. You inspire us with your commitment to their success.