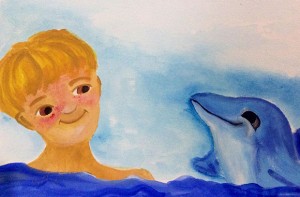 Just the other day, I was swimming in one of my favorite spots near the reef when I saw a boat. I had never seen this boat before and was wondering who was in the boat. Being the friendly and curious little dolphin that I am, I went over to say hello and introduce myself. When I got closer I noticed that there were some people swimming nearby, but there was a boy on the boat just sitting and dangling his feet in the water. He was watching everyone else. I poked my head out of the water and said,

The boy jumped up and his hands began to move. He smiled at me and said,

“My name is Daniel but my mom calls me Puti.”

“Can you swim Daniel Puti?”

“Yes. I’m just not sure about swimming here,” said Daniel Puti. He was hopping up and down in the boat so much that it was making waves.

“This is a great place to swim Daniel Puti, all the fish love it. There’s lots to see,” I told him, “It will be lots of fun.”

“I’ve never swam with a dolphin before. I don’t know.”

“Well hello there little fella,” Daniel Puti’s mother came over. “Puti, it looks like you are making a new friend. Does he have a name?”

“Dolphins are my favorite creatures in the world! What’s he doing here?”

“Kenny wants me to come swim with him, ” said Puti, he was still flapping his hands a little bit, but he had stopped hopping when his mom came over.

“Well Puti you ARE a great swimmer; why don’t you join him?”

“I can’t think of anything safer than swimming with dolphins as your friend,” said his mom. “But you should get your snorkel and goggles so you can see what he sees.”

“I’ll take good care of him,” I told Puti’s Mom, “He has nothing to feel nervous about.”

“Those things can make me uncomfortable too sometimes! I think we’ll get along great!” I said.

“Me too,” said Puti’s mom smiling a big beautiful smile just like Puti.

“Ok, I’m ready,” said Daniel Puti. He was wearing his goggles, snorkel and had on flippers.

“Bonyo!” He said, then hopped in with a splash. As we swam I showed him where my favorite reef was and he told me about the Phillies being his favorite baseball team ever (he was from Philadelphia) and that even though they were not doing so great this season he hoped that they would turn it around. He told me that he loved riding on the train back home in Philly, but he loved riding on the boat here in the ocean too.

“What’s your favorite food? Mine is pepperoni pizza, but my mom won’t let me have it every day.” Daniel asked me.

“Ugh! My aunt eats shrimps on her pizza, it’s so gross. I call it her yucky pizza”

“I think that sounds good! Do you like anything besides pizza?”

I like calamari, my aunt calls them tentacles. I love burgers and fries.”

“We don’t have those in the ocean. But I bet they would be good if we did!”

We swam around some more.

“You can just call me Puti,” said Puti Daniel. I promised that I would.

As we swam around I learned that Puti loves the ocean because it is blue and that is his favorite color. I learned that he loves being near the water and just watching movies and swimming because it makes him feel calm and relaxed. I also learned that once I got Puti talking, he had a lot to share and would also be my new best friend for life. We made a plan to swim again together soon (his mom said that it was a great idea and tossed me a fish that Puti had caught earlier that day which I ate immediately).

When we swim together again, who knows what we will see, who we may meet and what we will learn? I can’t wait!

Fragile X Syndrome is a genetic condition that can cause disabilities with regard to intellect, learning and behavior as well as some physical traits. It is typically more noticeable in males than in females. Some traits can be similar to autism, such as perseverating, OCD, and social anxiety. Also similar to Autism, Fragile X Syndrome is a spectrum, and no two individuals are exactly the same. People with Fragile X do tend to be very gentle, extremely compassionate and considerate of others, as well as kind and generous with very big senses of humor and exceptionally long memories. To learn more about Fragile X Syndrome, please visit the National Fragile X Foundation at fragilex.org.