A Friend to the Sea Turtles

After I met Ethan, I enjoyed the Caribbean so much that I decided to stick around for a while and explore. I headed south and I discovered Tortuguero, Costa Rica. This was a very interesting area because there was so much going on. I saw sloths, iguanas, lots of birds and even a jaguar (I dove pretty deep when I saw her because even though a jaguar is a cat, they don’t mind getting wet). I also made two new friends. I was moving along the shoreline when I noticed a young girl swimming in a funny way. I quickly swam closer to see if she needed help. She was swimming along with a very small turtle.

“Hi! My name is Kenny,” I said. It is always good to introduce yourself.

“Hi Kenny, my name is Maritza, but people call me Mar, like the ocean”, she answered.

“I like that! Then you must truly be at home in the water,” I said.

“I believe that we should all be one with the water,” Mar said, “Water is life and our water’s health is our health”.

“I definitely agree! “ I said, after all, being a dolphin, I live my entire life in the water, so, if the water is not healthy, neither am I!

“What are you doing there?” I asked her.

“This is Jairo. He is a baby sea turtle. He is the only one left from his nest, I am just trying to make sure that he makes it to the sea safely.”

“The only one left? What do you mean? I thought that sea turtles laid lots of eggs in their nests.” I was surprised. I once met a turtle who said that she laid eighty eggs. That sounded like a lot of work! How could there only be one little turtle from so many eggs? 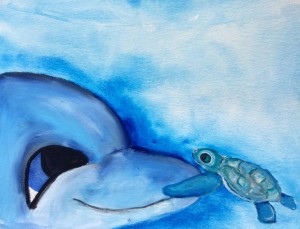 “A lot of his fellow eggs were taken by poachers,” said Mar, “They took almost the entire nest but my parents and the police chased them away. Poachers sell the eggs which are considered a delicacy in some cultures. After that happened, we watched over the nest until it hatched, then we tried to protect the few little turtles left over as they moved to the sea from birds and crabs and other predators. Little Sea Turtles have a tough life! Jairo here was the last one from the nest and I am just trying to make sure that he has a good start in life for as long as I can. Unfortunately, I don’t live in the water, so, sooner or later I will have to leave the little guy. I hope he will be ok.”

“Wow, they sure do. It is amazing that any of them survive at all! He is so tiny!” I said. He really was. I am a very young dolphin and pretty small myself. He was smaller than my nose.

“That is why they are endangered,” said Mar. “There once were turtles that nested all up and down the coast. The turtles come back to the same place every year. They lay their eggs at night, then go back into the water. For many years, people took the turtle eggs for food until they learned that doing so might mean that there would be no more turtles left in the sea. Most people around here have stopped taking the eggs, but some places in the world still serve turtle eggs in soup and other dishes. And in some far away countries, people pay a lot of money for turtle eggs.  That is what causes poaching. If people didn’t pay the poachers, they wouldn’t take the eggs.  Some poachers find the nest and take the eggs, even while the turtle is laying them.”

“That’s not very nice! I wonder how that makes the mother turtle feel?” I said. How would they like it if someone took their babies?

“But don’t sea turtles live for a really long time?” I asked.

“Well, yes. That is if they survive,” Mar answered, “There are a lot of predators in the water as well as on land and in the skies. The poor little turtles have such a difficult and dangerous life already and they are just babies. Poachers just add to the difficulty, and when they are eggs, well, they can’t escape and run or swim away. It makes me very sad. I hope Jairo will be alright.”

I was feeling worried for little Jairo too. He was just a baby, only a few days old and already had so much danger in his life. Mar was doing all she could, but she was just a human, and humans don’t live in the water. I wondered how I could help.

“I never leave the water,” I said, “so if you like, I could help to protect this little guy.”

Mar smiled at me. “I think that is an awesome idea!” 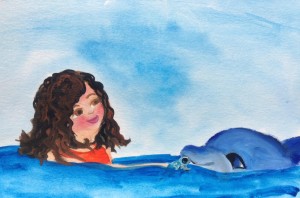 We swam around for a little while longer until Mar’s Mom called her in from the water. Then Jairo and I explored the sea near where I had met him. It was new for him too because he was so young. He swam and I followed him around making sure that no one bullied him. The next morning, Mar joined us in the water and spent the day swimming around with us. We showed her all of the things that we had discovered about the sea nearby. Jairo went out deeper and deeper each day, but I stayed with him. Mar stayed with us when she could, but eventually we had to say goodbye to her. We decided to head south and see what we could find there. With me swimming alongside Jairo, no birds or other animals would try to catch him. Sometimes I would help him along. We both found many interesting things on our journey. I never forgot Mar and decided to that on my way home, I would love to visit her again and tell her how great Jairo was doing. I really admired Mar because she was one human kiddo who was truly one with the water.

There are seven different species of sea turtles living in the oceans today. Sea turtles have been swimming the oceans for at least 110 million years making them one of the oldest groups of animals in the world.  They are all listed as vulnerable to critically endangered due to hunting the turtles for their meat, shells, and eggs. Shells are used for both decoration and folk medicine (with no scientific basis). The eggs are considered a delicacy in some countries such as China. While many countries have made it illegal to hunt sea turtles and eggs, as well as to trade/ship or sell the eggs, poaching does occur and continues to threaten all species of sea turtles due to demand in certain countries for the eggs, meat, and shells. Additional threats to the sea turtles are fishing nets and traps which accidentally trap and drown the turtles, as well as water pollution such as oil spills, and trash.  The sea turtle conservation movement was pioneered by Dr. Archie Carr, who early on was concerned that the over hunting of the turtles and their eggs would end their kind. He began his work in Tortuguero, Costa Rica which began the change of the area from a turtle meat and egg market to one of the birthplaces of eco-tourism.  Sea turtles are actually useful to humans in a non-consumer capacity, for example, certain species feed exclusively on jellyfish thus reducing the populations and making it safer for us to swim in the waters frequented by the jellies. For more information and to learn what you can do to protect all species of sea turtles please check out the following links:

More about One with the Water

Want to help others start their journey? Want to help us make a child’s life better? Partner with us today to teach economically disadvantaged children, special needs children, and Service-Disabled Veterans to become One with the Water! Be a hero today! When you donate now, you can help reduce the risk of drowning for children by up to 88%! Be a hero and help us save the life of a child.