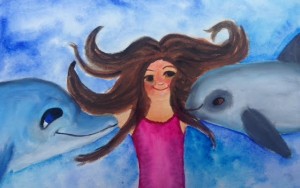 When I first decided to travel around the world and find new friends, I wasn’t sure where to go. After all, for a little dolphin like me, the sea is the limit! I figured I might head south to start, and from there, I would just see where the water would take me. After a while, I found my way to the Gulf of California in Mexico. It was there that I met a wonderful little girl and a very rare cousin that I never knew I had!

On this day, the water was wonderful and blue and placid. The sky was filled with sunshine and little fluffy clouds.  It was a great day to start traveling. Close to the shore, I noticed two other swimmers. One was a little girl, the other was, well, I did not know what she was. I was curious, I had to know what this unfamiliar little swimmer was. The little girl saw me first.

“Hi! My name is Rosa. What’s your name?” she introduced herself.

“Hi Rosa, I’m Kenny. Who’s your friend?” Whatever she was had just joined us.

Cousin? What could she mean, cousin? I looked at Chloe, and sure enough, she did look a bit like me, only a lot smaller. She was smaller than Rosa, and Rosa was a little girl!

“Hi, Chloe. I didn’t know I had a cousin down here,” I said. I was very excited! A new cousin, how great was that?!

“Hi, Kenny,” Chloe said in a very soft voice. She was a little bit shy.

“How come I never knew about you?” I asked.

Rosa said, “Probably because there aren’t very many vaquitas around anymore.”

“Vaquitas? What is a vaquita?” I asked. I had never heard of a vaquita, and I thought I knew about all of my relatives! There are quite a lot of us cetaceans swimming around.

“I’m a vaquita!” Chloe said. She was laughing now.

“A vaquita is a type of porpoise like you are, but obviously different because she is so much smaller than you! Vaquitas are the most endangered cetaceans in the whole world. They only live in this area right here.” Rosa chimed in. She was very knowledgeable. “And, they are my favorite sea creature ever!”

“I don’t know, I just love all dolphins, and vaquitas are my favorite. I think they are really cute! I love them so much that my Mama calls me Vaquita Rosa, because I have pictures of them all over my room. I read every book about them that I can find! When I grow up I want to help save them from extinction!” said Rosa.

“No, I mean why are they so endangered?” I said, though Chloe was really cute. She was not even five feet long and she had such a cute little smile.

“Because of these things called gill nets that are used to catch fish called a totoaba which is also endangered, so these people shouldn’t be trying to catch them anyway. Vaquitas get tangled in the gill nets and can’t swim. “

“Why would someone catch such an endangered fish? I mean, aren’t there any laws that protect them?” I asked. This was very sad news because I really liked having a new cousin and wanted to meet more like her.

“There is a demand for that fish because it is thought to be medicine or something. Either way, the people who catch them are poaching. There are laws both in California and Mexico that are supposed to protect both vaquitas and totoabas. It is just difficult I guess to pay attention to such a big area for the police. That’s why I spend as much time as I can with Chloe and her friends, I want to keep them safe. And if I see any poachers using those horrible nets, I can let the police know about it.”

“I think that it is wonderful what you are doing for my cousins, Rosa. And I am so happy to meet you, Chloe! We must keep in touch!”

“We must!” agreed Chloe. 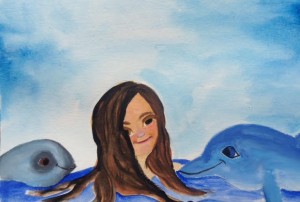 I spent a few days with Rosa and Chloe, helping to watch out for gill nets and fishermen. I really wanted to protect my new cousin. With more people like Rosa on her side, I knew that there might be a good chance for Chloe and her kind. I wondered how we could keep Chloe and the other vaquitas safe so that they might not become extinct. The only answer that I could come up with was making it so that nobody ever used those nets anywhere near where the vaquitas lived. Then the Gulf could be full of vaquitas again. That was a very nice thought. I think that it is important to take care of all my cousins and friends in the oceans, because, after all, we are all One with the Water.

Vaquitas are smallest member of the cetaceans (whales and dolphins) and the most endangered. They only live in the Gulf of California that borders Southern California and Mexico. The main reason for the decline of vaquitas is the use of gillnets for illegally capturing the totoaba, a fish that is also critically endangered and other nets for capturing shrimp and other fish. The totoaba is valued in China for the fish’s swim bladder which is considered to be a delicacy and believed to be medicinal (there is no scientific evidence that supports this). Attempts have been made by both California and Mexico to halt the use of gillnets and halt poaching of the fish for the sake of both the vaquita and the totoaba, however, poaching still occurs due to demand for the fish.

For more information on Kenny’s cousins, or to learn how you can help the vaquita, please go to:

Have you already experienced what swimming can do? Partner with us today to teach economically disadvantaged children, special needs children, and Service-Disabled Veterans to become One with the Water! Be a hero today, and when you donate now, you can help reduce the risk of drowning for children by up to 88%! Be a hero and help us save the life of a child.

Want more details? Visit our foundation page to be a hero.