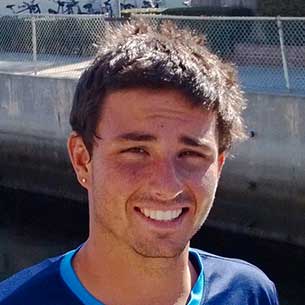 Swim Instructor Eric Nissen began swimming at an early age, having his first encounter with water around his 3rd birthday. He jumped in the pool, loved it, and has been swimming ever since. As a kid, he enjoyed all outdoor sports and activities. Enrolled at the age of four in sports, he played football, basketball, and baseball year-round until his late teens. He competed in and won city championships for baseball and football. In middle school, he was in track and field and the cross country team, competing in a number of races at Mt.Sac and all over SoCal.

In high school, he joined the swim team at Palisades High, and swam the 100 and 200 butterfly, as well as the 100 butterfly in the IM relay. His school won finals twice while he attended.  After high school, he continued swimming and joined LA city lifeguards, where he started teaching lessons and working with kids. He continued lessons in Boulder, CO. while attending the university for a degree in creative writing. He currently bikes, swims and runs daily to train for century bikes and triathlons for charity.  He hopes to compete in the Norseman Triathlon later in life.

He is certified in lifeguarding/ first aid with bloodborne pathogens training, CPR/AED for lifeguards, and has a WSI certification.