The Protector of the Dragons! 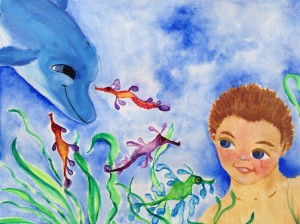 Being that I live in the ocean, I can go almost anywhere I want to. One day I decided that I would go to Australia. It took me awhile to get there but it was beautiful! It was in Australia that I met Julian and his friends the sea dragons.

I had just arrived on the southern coast of Australia when I spotted a little boy with goggles, flippers and a little air pump for diving. He swam almost as well as I do! I wondered if he were half dolphin. He looked at me with big happy eyes and a huge grin on his face.

“Well, hello there, little guy! My name is Julian and I love dolphins! You can be my new sea buddy! I shall call you Finny!” Julian announced.

“I am happy to meet you Julian, but my name is Kenny,” I said laughing. Julian was a very enthusiastic little boy. What are you doing diving out here? You are so little!”

“My parents are marine biologists. I have been swimming longer than I’ve been walking!” Julian had a great smile and he seemed to be so happy. I was thrilled to be his new ‘sea buddy’.

“That is awesome! What are you doing here?” I asked. I was surprised that such a young person was swimming out here and was very curious as to why.

“My parents are writing a book about the sea buddies that live here. Only they don’t call them sea buddies, they call them ‘marine life’”. Julian stayed still smiling. That kiddo never stopped smiling.

“That is really cool. What sea buddies are they writing about?”

“They like to study different kinds of seahorses. So do I. My favorites are the sea dragons! I think that it is so cool that dragons live in the water!” Julian was just about the most enthusiastic child that I had ever met.

“Would you like to meet my favorite sea dragon ever? His name is Max. I love all the sea buddies but Max is my favorite! He’s my pet dragon. His friends are called Swimmy and Weedy and there are many others.” As Julian told me this I wondered what the dragons’ names actually were.

Julian continued to talk, “I don’t know any other kids that have real pet dragons. Well, he’s not really my pet, he is wild after all. But he’s like my pet. I think he likes me so much because he knows that I am the dragon protector!” Julian said. “Here is Max! Max! Your protector is here!” I thought this was very funny. I had to keep myself from laughing because I didn’t want to hurt his feelings.

“What does a dragon need protection from Julian?” I asked watching him swim with his little dragons.

“Well, Kenny,” Julian said in a very serious tone, “they need to be protected from people.”

“No! A dragon needs to be protected from people? You’ve got to be kidding!” I was laughing. Julian was not laughing. In fact, he was very serious. I thought that this was funny because he was only a little boy after all.

“Kenny, do you think these dragons are pretty? Aren’t they neat to look at? See how wonderfully their fins move when they swim? The fathers do all the work that our mothers do. They even have the babies! That is very interesting, isn’t it? They are very unique.” Julian said, still sounding very serious. It was really cute to hear such a little boy use the word unique. But he really seemed to know everything about the little dragons.

“They are pretty and interesting. They are very unique Julian. But that does not tell me why they need to be protected from people. I would think that people would love them like you do.” I said to him.

“Well, Kenny, you see, a lot of people think that they are so interesting and pretty that they want them for pets. But they don’t want them to be their wild sea buddy pets, they want to put them in their aquariums because they look so neat. So, what happens is divers come here and catch them and sell them for money. People have caught so many that the poor little dragons have become threatened!” Julian was extremely serious and now seemed almost sad. “Can you imagine it, Kenny? What if you were swimming along one day and someone caught you in a net and you ended up living in an aquarium forever and ever? If your home was so polluted by oil and factory waste that it was hard to survive? And can you imagine the world with no sea dragons in the ocean?” 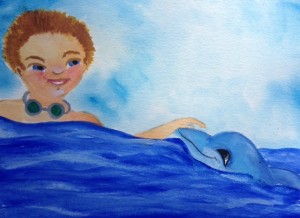 “No, I cannot imagine either of those things,” I agreed. I was so impressed by Julian’s passion for these little creatures. “But I think that they have a good chance with the dragon protector here to look out for them!”

“It’s a big deal,” said Julian, “Animals need to be protected and allowed to live here too. My mom says that all life forms are important. I think she’s right.”

Just then, we saw his mom swimming over to join us.

“How is my little sea dragon protector?” she asked smiling. “Julian, are you going to introduce me to your new friend?”

“Mom, this is Kenny. He loves the dragons also!” Julian gave his mom a big hug.

“Kenny, are you helping Julian with the dragons?” Julian’s mom asked.

“Well, this little dragon has to go in for dinner. Will you be back tomorrow?”

“Absolutely!” I said. I was happy to find a friend so quickly in Australia. For the rest of my time there, I spent every day with Julian. We had lots of great adventures and made friends with many more sea buddies. Julian was thrilled to have another dragon protector to help. And I was excited that such a little boy cared so much about the threatened creatures of the world. He was truly one with the water!

Sea dragons are in the same family as seahorses and pipefish. Sea dragons can only be found off the Southern coast of Australia. They feed on tiny crustaceans. The largest sea dragons can grow just over a foot long. Their decorative fins and appendages serve as camouflage to protect them from predators. Originally there were only two species of sea dragons, the leafy sea dragon, and the weedy sea dragon (named because of their similar appearance to plants). Only in 2015 was another sea dragon, the ruby sea dragon discovered in deeper waters on the west coast. The sea dragons are endangered because of water pollution, increasing storms due to climate change and the marine pet trade. Laws have been put in place by Australia making it illegal for these animals to be caught in the wild. To learn more about sea dragons, please visit http://legacy.earlham.edu/~warreem/seadragons.htm.

Have you already experienced what swimming can do? Partner with us today. Help teach economically disadvantaged children, special needs children, and Service-Disabled Veterans to become One with the Water! When you donate now, you can contribute to reducing the risk of drowning for children by up to 88%. In addition, your donations help us to provide essential therapeutic and emotional support for children and Veterans with disabilities. You can be a hero, and help us save the life of a child. Want more details? Visit our foundation page to see how you can be a hero and save lives.

Want more details? Visit our foundation page to be a hero!