The Effect of Swimming on Stereotypical Autistic Movement

Over the years here, we’ve repeatedly touted the benefits of swimming lessons for children on the Autism spectrum. including increased positive changes in overall fitness, functional skills, social skills, and aquatic skills. However, we haven’t specifically addressed the positive effect of aquatic swimming therapy on stereotypical autistic movement behaviors. (Children with an Autism Spectrum diagnosis commonly seek vestibular input using repetitive movements, including swinging, spinning, climbing, jumping, or other rapid movements like the flapping of hands and arms.) (1)

It’s been common knowledge for some time that aquatic therapy has a myriad of positive outcomes for children with ASD. However, in 2004, some researchers set out to determine the specific effects of swimming on motor performance in children with ASD, with the following results. After ten weeks, not only did strength and flexibility increase, so did balance, agility, and power. Also, the number of stereotypic behaviors decreased by about half. These included spinning, swinging, delayed echolalia and no reaction or delayed reaction to a stimulus within 5 seconds. (2) 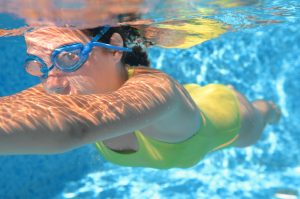 The literature, while still sparse in this specific area even now, is clear. The natural repetitive motions used in swimming and therapeutic properties of the water can mimic the repetitive and self-soothing behaviors used by children with ASD.

At One with the Water, our founder, Coach Rippetoe Coach Kenneth has extensive knowledge of the principles used in the field of Applied Behavior Analysis (ABA) and the ethical considerations involved in working with children with autism. Additionally, Coach Rippetoe is a Level 4 Disability Swim Coach certified by the American Swimming Coaches Association.