Redefining Beauty: Why Everyone Should Learn To Swim

Help your children learn to swim. Their bodies are capable of incredible feats. Before I learned to swim competitively, I was a girl who cared about being skinny. I longed for the petite frame considered ideal by American standards. As a child, my family would weigh me far too often, comment on my body regularly, and pressure me to lose weight. My father kept charts and graphs that documented each pound, and these papers haunted my young mind. As a nine-year-old, I remember crying tears of shame after eating a box of cookies. Though I finally fought back and forced my father to stop, the mental damage was irreversible. It generated a decade of paranoia and anxiety surrounding my size. I possessed an intense fear of being fat throughout my early adolescent years, causing me to skip meals or constantly measure myself. The culture surrounding me was obsessed with frailness and fragility. It was the era of blogs like Thinspiration. I grew overly preoccupied with maintaining a skinny physique and being smaller than my tiny friends. 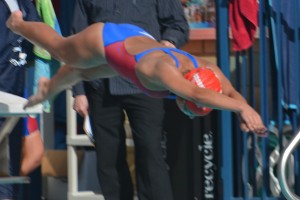 Then, I joined my high school swim team.

I learned to swim at a young age and at fifteen, I was a good swimmer, but completely unaware of the transformation ahead of me. Through competitive swimming, I immediately realized that I needed so much power to propel myself through the pool each day without fainting. My times quickly improved, but it was clear that a sacrifice needed to be made: I couldn’t worry about my weight anymore.

Swimming for three hours a day requires a great amount of energy. I would wake up at 6 am and fight through a grueling swim set before class. In class, I would try my hardest not to fall asleep. After school, I swam for two more hours until my body collapsed. At swim meets, I would win my races. It dawned on me that being skinny or small is actually a significant disadvantage in swimming. I wanted muscle. I wanted my body to be bigger than my competitors so I could swim faster. I began eating much more than usual, to gain strength. Breakfast, a meal I would typically skip, became so important. After morning practice, I would wolf down two waffles to keep my body energized enough to survive the day. Swimming several thousand yards per day without food is impossible. Each meal was crucial.

The entire meaning of “body image” changed dramatically. A girl who once tape-measured her waist began admiring the newfound muscles all over her body. In several months, I became rock-solid and needed new clothes. Body image was about how much power I possessed, and how fast my body could swim.

Those three years of competitive swimming equated to my most confident years. I had never felt so good about myself and so strong. I fell in love with my shoulders because they contained so much muscle and power. My shoulders could win races.

When my shoulders became too big for my sweaters, I felt a glimmer of joy. Those shoulders ended up helping me compete at the California State level for my remaining years of high school. 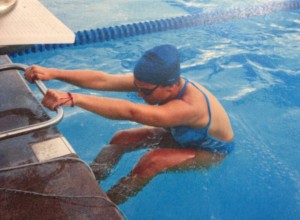 The most important thing that changed was my perception of beauty. Before swimming, I thought I could be pretty by upholding an angular frame and fitting into the smallest jeans at PacSun. However, I never felt proud of myself. I hardly owned any self-confidence because I consistently compared myself.

When I was eighteen, I felt truly beautiful. I appreciated the way my muscles could cut through the water and the strength swimming provided me. It was the first time in my life where I could really love my appearance. The sense of pride and accomplishment was unbeatable. I was beautiful inside and out.

I have not touched a scale in 5 years. I eat as I please. Oftentimes, I’d like to believe I’m a mermaid. Mermaids represent strength to me. They are radiant underwater goddesses who can swim for an eternity. They can slap the ocean with their massive tails and create a wave of forceful energy that shakes the stillness of the water.

To those worried about body image, my best advice is to learn to swim. It will redefine your ideals of beauty. Pulling your body across the pool each day triggers the greatest feeling of achievement and empowerment. Numbers on a scale will never compare to the pure happiness that swimming has provided me.

To the parents of young girls, I urge you to avoid commenting on your daughter’s weight. Teach her the value of self-love and self-kindness. Protect her from a damaging culture of body-shaming and dissatisfaction. Never let her cry over a box of cookies at nine years old. Encourage your girls to be strong and confident. Do not keep a scale at home.

I hope your child will someday love and accept his or her body for its strength and power in the water. Give your kids the courage to reject conventional beauty standards, and instead discover the pride and fulfillment hidden in swimming.