Meet Kenny, the One with the Water Mascot 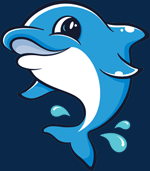 Kenny will be attending events, introducing you to corporate sponsors, and holding interactive contests including photo and challenge contests. And probably most important, Kenny will be a frequent contributor to our News blog, sharing and passing along great information about our swim school and how you can help your child enjoy and to stay safe around water.

Bottlenose dolphins are well known as the intelligent and charismatic stars of many aquarium shows. Their curved mouths give the appearance of a friendly, permanent smile, and they can be trained to perform complex tricks.

In the wild, these sleek swimmers can reach speeds of over 18 miles (30 kilometers) an hour. They surface often to breathe, doing so two or three times a minute. Bottlenose dolphins travel in social groups and communicate with each other by a complex system of squeaks and whistles. Schools have been known to come to the aid of an injured dolphin and help it to the surface.

Bottlenose dolphins track their prey through the expert use of echolocation. They can make up to 1,000 clicking noises per second. These sounds travel underwater until they encounter objects, then bounce back to their dolphin senders, revealing the location, size, and shape of their target.

When dolphins are feeding, that target is often a bottom-dwelling fish, though they also eat shrimp and squid. These clever animals are also sometimes spotted following fishing boats in hopes of dining on leftovers.

Bottlenose dolphins are found in tropical oceans and other warm waters around the globe. They were once widely hunted for meat and oil (used for lamps and cooking), but today only limited dolphin fishing occurs. However, dolphins are threatened by commercial fishing for other species, like tuna, and can become mortally entangled in nets and other fishing equipment. (http://animals.nationalgeographic.com/animals/mammals/bottlenose-dolphin/)