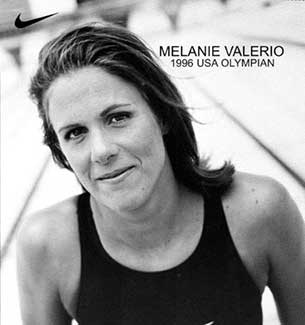 Melanie Valerio grew up in Cleveland, OH where she became the fastest 100 freestyler out of high school.  Accolades include 1996 Olympic Gold Medalist, first female swimmer sponsored by NIKE, first ever TIMEX Fitness Director, and first Ironman athlete sponsored by a rock band-Cheap Trick.

Post-swimming, Melanie became a member of the TIMEX Multi-Sport team as an Ironman competitor. She holds a master’s degree in Exercise Physiology from the University of Virginia and enjoys balancing life as an athlete, full time professional and 40-year-old female.