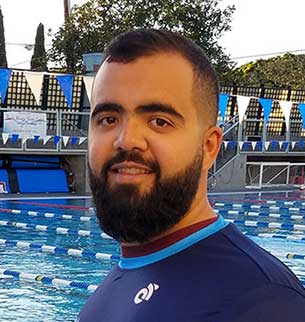 A huge fan of the sport of swimming, Mohammad began coaching at the Santa Monica YMCA in 2006. He took over the YMCA team as head coach in 2011 and was able to increase membership and improve performance across the board.

Mohammad joined One with the Water® after his 10th year of coaching swimmers ranging from beginners to sectional qualifiers. His age group swimmers have been competitively ranked in Southern California and nationwide. He has also had the pleasure of coaching Olympians, Senior and Junior National qualifiers, college swimmers, and master’s swimmers in his many swim programs. Over the past two years, Mohammad has been working with kids and adults, and more frequently with special needs swimmers which he has found extremely rewarding.

Coach Mohammad is currently working alongside coach Dave Kelsheimer, a USA National/Olympic Team coach, and has attended the USA Olympic Trials as a swim coach for multiple swimmers.

Coaching since 2005, Mohammad is an ASCA Level 3, and USMS Level 2 coach and the head coach for the FINA World Cup in Hungary, June 2019. He aims to impart his unparalleled joy for swimming to swimmers during every practice. Mohammad believes that anyone can learn to swim and be a great swimmer at any age. Mohammad also believes that every athlete can reach their potential through hard work and goal setting, and he challenges his swimmers to do exactly this – in the pool as well as in their personal lives.