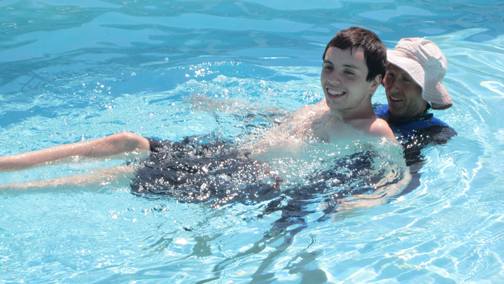 Benny Sperber-Compean, who has autism, swims with Kenneth Rippetoe, founder of One with the Water®, in the Palisades High School Maggie Gilbert Aquatic Center.

The smile on 18-year-old Benny’s face lit up an already bright day in the teaching pool at the Palisades High aquatics center as his instructor held his arms and the two navigated the water.

Sperber-Compean, who is in his third year at Pali, has autism, a sensory processing disorder and a form of catatonia, which causes him to occasionally hold himself in a rigid position. He is non-verbal, meaning that he communicates with sounds and motions, not words. He is currently taking swimming lessons from Kenneth Rippetoe, who founded One with the Water®, a nonprofit that offers swimming lessons for the disabled.

Waiting for his student was a second One with the Water® instructor Ben Odell, who attended St. Matthew’s, Loyola High and Harvard University. While at Loyola, he was a CIF champion and All-American, and also swam in college.

Odell said the other aspect of swim lessons for children with special needs is “there is a sense of play, freedom and independence.”

Benny Sperber-Compean, who has autism (non-verbal), swims with Kenneth Rippetoe, founder of One with the Water®, and Coach Ben Odell, in the Palisades High School Maggie Gilbert Aquatic Center.

Benny’s mother, Rebecca Sperber, who has a general therapy practice, was at poolside. Although Benny had taken swimming lessons through another agency, she made a switch a month ago. “He had been at the same level for two years,” she said. “He trusted Kenneth right away and he’s trying different things-he even put his head under the water.”

Benny Sperber-Compean, who has autism (non-verbal), swims with Kenneth Rippetoe, founder of One with the Water®, and Coach Ben Odell, in the Palisades High School Maggie Gilbert Aquatic Center.

As she watched, Rippetoe held Sperber-Compean under the armpits and then positioned him on his back. The teen stopped smiling, but once Rippetoe began towing him backwards, his happy face returned.

Sperber explained that one problem encountered by parents who have children who were diagnosed with autism in the early 1990s is lack of opportunities. “When they get this big and have severe autism, teachers have low expectations.”

Rippetoe, who has a master’s degree in business administration and a bachelor of science in mechanical engineering, is certified by the American Swimming Coach Association for Disability Level 3, gently helped Sperber-Compean roll over in the water and then showed him how to put his hands on the side of the pool and straighten his arms to help him push up.

When his hour lesson ended, Sperber-Compean started to exit the pool, but then turned around and went back into the water. After several minutes, he allowed Rippetoe to steer him back to the steps and he eventually exited the water.

Jerry Huang, 15, who prior to his lesson sped around in his wheelchair, was next. He has muscular dystrophy and, in the pool, he was working on pulling his left arm out of the water while swimming the freestyle.

“This program is really awesome for kids with disabilities,” said mom Tina. “It’s hard for people in a wheelchair to get cardio, so swimming is a great exercise.”

One with the Water® offers individualized instruction for children and adults who have ADD and ADHD; anxiety; auditory processing disorders; autism; Down and CHARGE syndromes; amputation; cerebral palsy; spina bifida; spinal cord injuries and obesity.

“We rely on donations to provide financial assistance to families who need lessons but can’t afford them,” said Rippetoe, who grew up in Texas and moved to Los Angeles in 2006. He worked as an English/Spanish translator for Manatt Phelps & Phillips for two years before becoming a mechanical engineer at the VA in Brentwood. He started One with the Water® in 2011. “I love it,” Rippetoe said. “When Benny looks in my eyes, I can tell he’s there-they look right into my soul-it’s a spiritual level. He’s super smart and in the moment.”